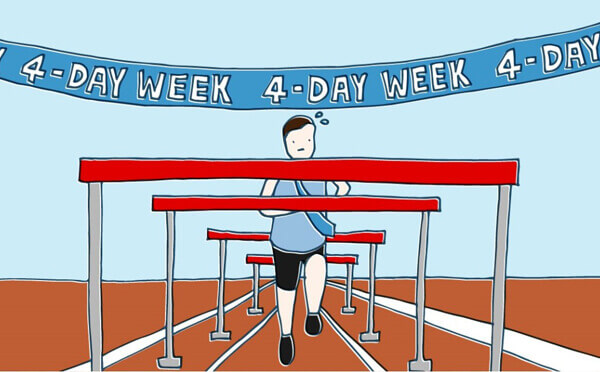 Back in June of this year I announced that we were bringing in a 4.5-day week in anticipation of moving to a four-day week by 2021.

I’m really passionate about this idea. We live in a modern age powered by automation. We should all be working less, taking better care of our mental health and spending more time with friends and loved ones.

Lots of people told me I was crazy. I said that we would see an uptick in productivity and employee engagement, and no decrease in service. They told me it was likely to put more stress on managers, and that lots of people wouldn’t take the extra half-day.

It turns out: I was right. And you were also right.

Today I walked around the office and spoke to people across every department about our Flexi Friday initiative. I wanted to know if they were taking the half-day, what they were doing with it, and how the system could be improved.

Overall, it’s been a success. People across all teams say it’s a major bonus of working here. New recruits told me it was a factor in their choice to work at BigChange. They couldn’t wait to finish probation so that they could also benefit from the extra time off.

“It feels like I get a proper weekend now,” said our HR director, Sonal. “It’s a big advantage of working here,” Julie from credit control told me. “The extra time off is more valuable than money,” said Isaac, 23, who joined us straight from university.

My straw poll today really brought home the dedication of my team. Tom, who works in commercial, said: “It encourages me to keep on top of things during the week but, if there’s work to be done, I won’t always take it.”

Sonal is meeting with all the managers next week to get a full report but said anecdotally that Flexi Friday has been well-received and there have been no complaints so far.

But there are issues with the new system. I worried that some of the customer-facing teams would struggle to take half days every Friday. That has been the case. Instead they take a half-day at other times in the week but it’s not the same.

Not everyone is able to go flexi. My head of professional services said that he’s told all his friends about it and they’re jealous – but he’s yet to actually take an extra half-day because he has too much on.

BigChange is growing so fast that some teams have just enough people to handle the workload. They simply can’t spare anyone on a Friday. Managers are handling the extra work of allocating resource admirably but there’s no doubt the extra employees absences put pressure on them.

One thing is clear: we need to recruit a lot more people. We can’t expect managers and teams to wholeheartedly embrace Flexi Friday without extra hands on deck. That is now a priority for me: there needs to be cover for every role. That’s the only way to make 4.5 days truly workable.

We are coming towards the end of 2019 and hurtling towards the New Year. I don’t have long to iron out the kinks before we move to a four-day workweek. But we are making progress, and there has been no detrimental effect on service or delivery. Hats off to the team for making this bold idea a moderate – if not runaway – success. And thank you to all the doubters for keeping my feet on the ground. If you have any advice on getting over these last few hurdles, get in touch.

Dive straight into the feedback!Login below and you can start commenting using your own user instantly

Martinport uses cookies to ensure that we deliver the best experience. If you continue to use this site we will assume that you are happy with our cookie policy.Accept